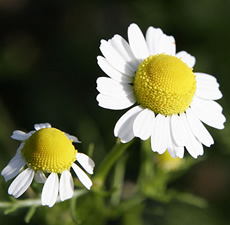 Chamomile Differences:
Blue Chamomile essential (Matricaria recutita) oil Has a high content of azulene, the active organic compound of  chamomile, which bears a blue color. azulene has anti-inflammatory, skin  healing  properties. This oil is most suitable as an ingredient for skin care  products.  Blue chamomile is derived from the German chamomile plant, which is  an upright  growing annual. There are German chamomile plants that were breed for a high  azulene content to use in the manufacturing of medicinal chamomile  products.
Roman Chamomile (Anthemis nobilis L) essential oil Is used for its skin healing  properties in the manufacturing of body care products, as well as for  aromatherapy. It has a very pleasant, soothing, apple-like aroma. The Roman chamomile plant is a low  growing, perennial ground cover.
Moroccan Chamomile essential oil (Tanacetum annum) Is not from a true chamomile plant. It is used  mainly in perfume blends, and for aromatherapy. The plant is an annual that  grows in the Mediterranean and in the  Middle East. This is a product new to the market, it does not have a long  history of traditional uses like true chamomile.
NEED HELP
CONTACT FORM

​
Rain On The Land  Boca Raton, FL. 2009-2020 RainOnTheLand retain all rights regarding their trademarks and trade names. These marks and names are registered and/or common law trademarks of RainOnTheLand and may not be used