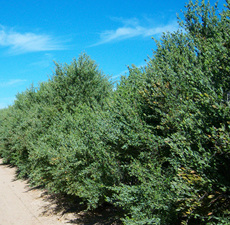 It was the Native Americans who discovered the importance and versatility of  jojoba. During the early Eighteenth Century Jesuit missionaries in Baja observed  them heating jojoba seeds to soften them. They then used pestle and mortar to  create a salve or buttery substance. The latter was applied to the skin and hair  to heal and condition. Native Americans also used the salve to soften and  preserve animal hides. Pregnant women ate jojoba seeds, believing they assisted during childbirth. Hunters and raiders munched jojoba on the trail to keep hunger at bay.

Of more than 350,000 identified plant species,  jojoba is the only one which produces significant quantities of liquid wax  esters akin to the natural restorative esters produced by human sebaceous  glands. For you chemists out there, the esters, of high molecular weight, are  composed almost entirely of straight-chain acids and alcohols. The acids are a  mixture of eicosanoic and docosanoic, with small quantities of palmitoleic and oleic. The alcohols consist of eicosanol and docosanol, with smaller quantities  of hexacosanol and alcohols of lower molecular weight.

​
Rain On The Land  Boca Raton, FL. 2009-2020 RainOnTheLand retain all rights regarding their trademarks and trade names. These marks and names are registered and/or common law trademarks of RainOnTheLand and may not be used